May Monster Madness (Don't Blink. Blink, And You're Dead) 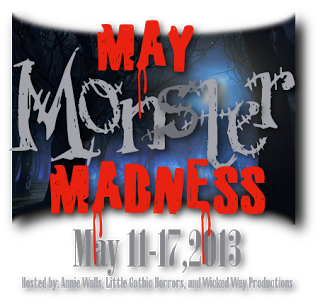 Hi everyone, as always thanks for stopping by. Hope you all had an awesome and safe weekend. And a Happy Mothers Day to all you moms!

May Monster Madness hosted by Annie Walls, Little Gothic Horrors, and Something WicKED This Way Comes.

My Monsters are ..... The Weeping Angels from Dr. Who.

When the revival series of Doctor Who aired the episode “Blink” from series 3 in June 2007, a new monster was created. The Weeping Angels are a species of winged humanoids from the early universe, so called because they cover their faces, giving them a weeping appearance, to prevent trapping themselves in stone form for eternity. 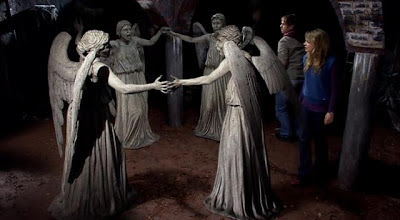 The Weeping Angels have the ability to move creatures back through time with a touch. This allows them to consume the potential energy left behind by the people they send back. What makes them horrifying is that they remain statues if they are looked at but once they out of sight, even in a blink, they can move terribly fast and kill you. Thus the tagline “Don’t Blink” was born.

“Fascinating race, the Weeping Angels. The only psychopaths in the universe to kill you nicely. No mess, no fuss, they just zap you into the past and let you live to death. The rest of your life used up and blown away in the blink of an eye. You die in the past, and in the present they consume the energy of all the days you might have had, all your stolen moments. They’re creatures of the abstract. They live off potential energy.” Reference


Did You Know: The great state of Michigan (I was born and raised there) recently celebrated its 176th birthday.

Fun Facts: The name Michigan is the French form of the Ojibwa word mishigamaa meaning "large water" or "large lake." It is the only state with two peninsulas. Michigan ranks first in boat registrations. And although it is called the Wolverine State, there are no longer any wolverines there. Except in Ann Arbor. And Sault Ste. Marie is the third oldest remaining settlement in the United States. Who knew?

Finally: This is my new blog. If you could be so kind as to hit the FOLLOW Widget at the top of my right side bar, and update your blog roll on your site with my new URL, I would greatly appreciate it. Thanks!!!