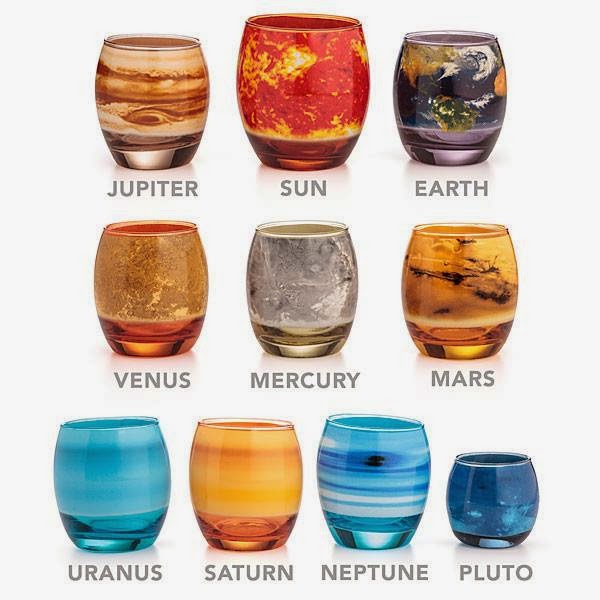 Cool Holiday Gift Ideas: Hi all. I know many people are looking for a certain something to give a certain someone. Look no further than Think Geek. 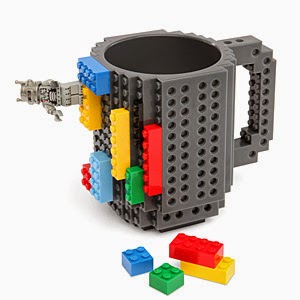 They have toys, T-shirts and other apparal, electronics and gadgets, home nad office, even survival stuff like this coffee mug . Lots of other geeky nerdy dorky stuff too. Think Geek

Finally, I leave you with this. I think I posted this least year. If so, it’s certainly worth a repeat. It’s Mr. Bean’s Nativity Scene. Enjoy!

My Paid Online Promo Results and Question of the Month 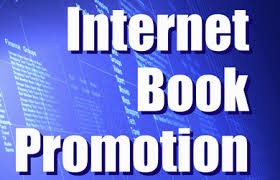 Hi everyone, as promised, here are the results for five paid promos I did during November, pricing Salem’s Daughters at $0.99 Two worked very well, one was okay and two flopped.

I made my money back with a little left over, and the spike in the Amazon rating added much value to the promo. Salem’s Daughters soared to about 3,500 and almost hit number one in the Witches and Wizards sub-genre with a sustained top 10,000 ranking for a week. Note: You can only promote a particular book once every three months with BookSends, although you can use them once a month for other books. 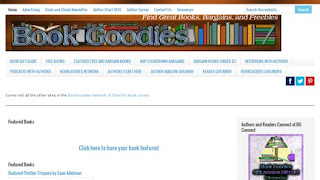 By far the best bang for my buck. I had the most downloads here and again saw my Amazon ranking hit 2,500 with a sustained top 10,000 ranking for a week!

What Kind of Worked eReader Café December 1st Book of the Day $35.00 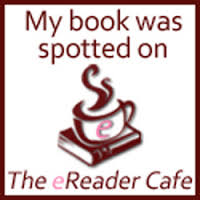 This was the most expensive promo and I made half the cost back. Combining this with the first two, I broke even. The Amazon rating was boosted but not as much.

What Bothered Me was I paid extra to be Book of the Day and all that got me was a black border around my cover image and Salem’s Daughters was listed last among the other books being promoted that day.

I’ve never heard of them either. I saw reviews where writers used their $5.00 program for a free download promo and were very much satisfied with their results. So I tried it with my paid promo. They offered additional exposure for a few dollars here and there and with PayPal fees I was up to $21.25. I saw a small bump in downloads and that’s all.

However if you let BKnights know you found Fiverr on KBoards, they will run all five gigs for you for only $5.00. I didn’t know it at the time. Now that I know, for $5.00 I’ll try them again.

It was cheap so I tried it. They do have a free service, the $10.00 was an upgrade for additional exposure. I didn’t see much in sales.

I was rejected by Book Bub. No surprise there, but if they had accepted me I would have paid for the promo ($520.00). Also, eReader News (ENT) Book of the Day ($25.00 for my genre) and Read Free.ly (free) never responded to my submissions and follow up emails to use them. I’ve followed books promoted on these sites and have seen great results and will submit to them again soon.

I didn’t use Book Gorilla as I followed Amazon rankings of the books they promoted and I did not see enough of a spike in rankings (sales) to justify the cost of $50.00. 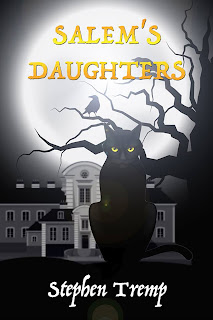 Overall I lost money but nothing I can’t handle. About $25.00 I’m not afraid to try something. And I got hundreds of my books out to new readers.

Moving Forward I will again submit to the ones that work: Book Goodies, GoodSends, eReader Café, eReader News, Read Free.ly and miscellaneous freebies together on one day and price my books at $0.99. I’ll go all out for that one awesome Amazon ranking. I hope to get it all the way up into the hundreds.

Reviews Why didn’t I think of this earlier? I’ve just added this to the end of my four books: Thank you for reading Salem’s Daughters. I greatly appreciate it.

If you liked the story, please consider posting a short review at Amazon or Goodreads. Reviews are the greatest compliment a writer can receive. And thanks again for reading Salem’s Daughters. I hope you enjoyed it.

Last Salem’s Daughters Blog Tour Stop What better place to end an exhausting blog tour that at Carol Kilgore’s Tiki Hut on Monday. Stop by and say hello. Mai Tais are on me. 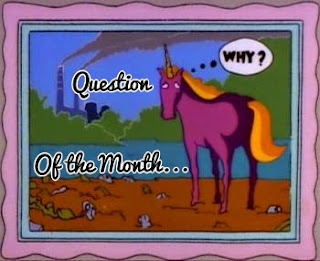 Question of the Month Brought to you by Michael D’Agostino at A Life Examined. Which one social convention would you get rid of?

Shaking Hands. I’m a guy and I know what guys do with their hands. Scratching every part of their body, sneezing and coughing into them, running fingers through their hair, handling money, not washing them after using the bathroom (I do but many don’t) touching door knobs that hundreds of other guy hands have gripped.

Nope, I don’t shake hands. I give a fist pump and don’t care if I offend people by it.

Question Have you ever paid for a promo like this or are you now considering one?
Posted by Stephen Tremp at 3:00 PM 32 comments: 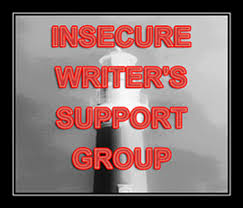 IWSG It’s the first Wednesday of the month and time for Insecure Writers Support Group. This week’s co-hosts are Sandra Hoover, Mark Koopmans, Doreen McGettigan, Megan Morgan, and Melodie Campbell. When you’re out and about today, take a few moments and stop by to say hello to these fine folks.

My concern this month is the changing marketing methods writers need to successfully promote their works. What worked last time may not work at all next time around.

Case In Point Breakthrough, my first book in the Chase Manhattan series, was in Borders Books and Barnes and Nobles across the country with book signings galore. Social Media for me was in its infancy as I just started blogging and struggled to understand Facebook and Twitter. But overall life was great! 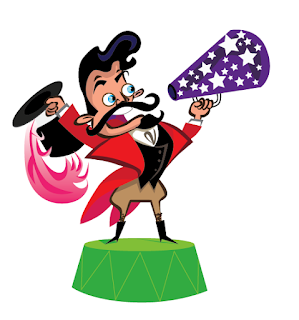 Opening For my second book, the days of brick-and-mortar stores were gone. However, social media evolved into a hugely successful promotional platform. A blog tour, Facebook, Twitter, Goodreads, and other such groups was a boon.

Escalation A bit of a dud, at least compared to the first two books. Again, no brick-and-mortar stores. Social media was okay and sales were so-so at best, even though I thought (IMHO) Opening was the best of the three books.

Salem’s Daughter A new day has dawned and I need to evolve. I’m trying something new. New, because it’s costing me a few dollars and up to this point I’ve enjoyed FREE when it comes to promoting.

Tune in Monday December 7th for my Online Marketing Results as I’ll tell what worked and what didn’t using eReader News, Book Goodies, BookSends and a couple others. Hopefully, you can glean meaningful information if you’ve considered using similar marketing methods. 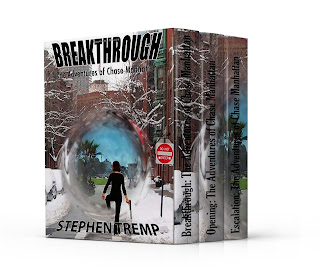 Breakthrough Trilogy Box Set I’ve completely re-edited all three books in the Breakthrough series, finishing with Opening Sunday night. I fixed typos, edited out a $h!+!0@d (currently under review to be a standard unit of measurement) of redundancies, and brought the books current to 2015. Amazing how fast our quickly changing world, well, changes. It’s a much smoother read. 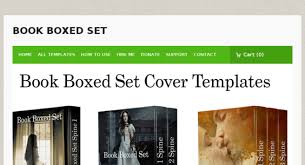 Like my Box Set image? I sure do! I used a template from Book Boxed Set for only $5.00, then using Photoshop and a few clicks of the mouse and the product was finished. I highly recommend them. If you’ve considered making your books into a box set and want a spiffy image, check out Book Boxed Set.

Salem’s Daughter Blog Tour I still have two more stops as this proved conducive to scheduling after Thanksgiving. Please take a moment to stop by and visit the awesome Betty at Bench With A View for one of my favorite topics Paranormal Vs. the Supernatural. I think you’ll really like this one.

Who Am I I write Speculative Fiction and embrace science and the supernatural to help explain the universe, our place in it, and write one of a kind thrillers. You can read a full synopsis and download Salem’s Daughters by Clicking Here.

Question How have you adapted to marketing and promotions changes over the past five years? Do you follow the same course, or have you tried new stuff?

Do you prefer black and white or color cover art for Salem's Daughters?

Should $h!+!0@d be considered as a standard unit of measure?
Posted by Stephen Tremp at 4:00 PM 45 comments: