L is for Leo, The First Private Space Telescope

My A to Z Theme focuses on the amazing breakthroughs mankind is on the cusp of discovering.

The Leo (Low Earth Orbit) Space Telescope was launched by Planetary Resources. It is an earth-observer that provides "on-demand" Earth imaging to a wider consumer base due to an "unprecedented low price. Leo is also an asteroid-locator.

“Leo provides spectacular views of the Earth’s surface and deep space, including the rich, virtually unexplored areas between our planet and the Sun. The Leo spacecraft camera will provide detailed celestial and Earth observations where you want them, and when you want them. Leo is capable of surveying for near-Earth asteroids during one orbit, then be retasked for rain forest observation on the next. The possibilities for utility and engagement are only limited by the imagination of the user.” 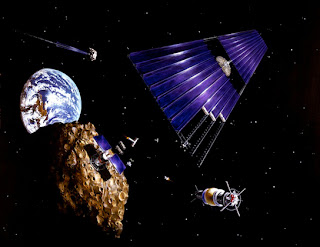 Planetary Resources’ Vision: bringing the natural resources of space within humanity’s economic sphere of influence and propelling our future into the 21st century and beyond. Water from asteroids will fuel the in-space economy, and rare metals will increase Earth’s GDP.

Planetary Resources’ stated goal is to "expand Earth’s natural resource base" by developing and deploying the technologies for robotic asteroid mining industry and the capability to transport the resulting products wherever desired. Another goal is to develop the technology to affect and control the orbits of small asteroids, including potentially hazardous objects in near-Earth space which present a serious risk of impact with the planet.

Check out the Reference Link. This is a fun Web site to navigate through. Gotta love what the private sector is doing these days!

And yes, this is my new blog. Thanks for stopping by and saying hello. Please take a moment to follow. Thanks!
Posted by Stephen Tremp at 12:01 AM