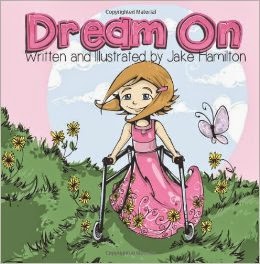 Dream On: Over the weekend wifey and I went to see one of our favorite Christian music performers Jake Hamilton and his band The Sound play at a local church. Hard to define his genre but it’s a combination southern gospel, rock, blues and sometimes hard hitting and edgy.

We met his family at the table where they sell CDs and such. Jake has written and illustrated this book titles Dream On for his amazing daughter.

Every little girl has a dream. Maybe it’s to be a princess, a pilot, an astronaut, or a ballerina. But some dreams require a little more effort and a little more time. But no dream is too big and no dream is impossible. The story of Gigi, a little girl with cerebral palsy won't let her physical disabilities limit her dreams. She knows that anything is possible. Join Gigi and be reminded of your dreams, no matter how young or how old you are.

The book is such a delight I wanted to take a moment and share it. If you know someone with a child with special needs this is an amazing book they could share with that child.

Jake Hamilton’s credits include work with the Jesus Culture Movement music and sound tracks for the Darren Wilson’s DVDs Father of Lights, Finger of God, and Holy Spirit.

After a little research I saw Darren used KickStarter to help fund his work. For those of you wondering about KickStarter and other such organizations, check out this clip of Darren Wilson doing a shout out for this funding platform for creative projects: KickStarter

Did You Know: Space Exploration Technologies Corporation (SpaceX) was scheduled to attempt to land its Falcon 9 rocket on a floating barge in the Atlantic for the second time Sunday, but the launch has been scrubbed because of issues with a first stage transmitter and a range radar. The launch has been postponed until Monday evening. Reference

A successful landing would mean SpaceX would be able to reuse the rocket in future missions, which could save millions of dollars over time. No more space junk. No more reentry back to Earth and crashing into the Pacific Ocean. This is huge, especially in the private industry where financial accountability to shareholders and investors is high priority. So stay tuned. Deep Space, here we come! Private industry such as SpaceX will more than likely lead the way.

Fun Fact: SpaceX designs, manufactures, and launches advanced rockets and space crafts. The company was founded in 2002 to revolutionize space technology, with the ultimate goal of enabling people to live on other planets. You have to have vision, folks. And the founder of Space X, Elon Musk, has no shortage of that.

Don’t believe me? He also started up PayPal and Tesla Motors. Deep space, here we come! 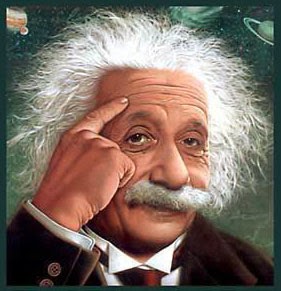 Finally: If you haven’t checked out last week’s post on Space Telescopes at the A to Z Website, go ahead and click on Einstein’s face at the top of me left side bar. Go ahead. He likes it.

Finally Part Deux: Finally: Check out my 2015 Celestial Calendar Tab above, or CLICK HERE. Its a treasure trove of really cool celestial events, most of which can be seen right from your backyard with the naked eye, binoculars, or an average store bought telescope.
Posted by Stephen Tremp at 12:01 AM